My opera, AIR, was premiered in 2005 at Rhode Island College, in Providence, by a professional cast and musicians from the Rhode Island Philharmonic, led by Edward Markward. This is the film of that Premiere.

I composed PANAPHONE in 2003 for my chamber orchestra at Rhode Island College. It is structured improvisation, and it features a "tuned" nautical buoy with two players, culminating in a cadenza.

This is a midi file of a "rock song" I composed in the 70's and then arranged for the Proteus String Quartet in 2013. 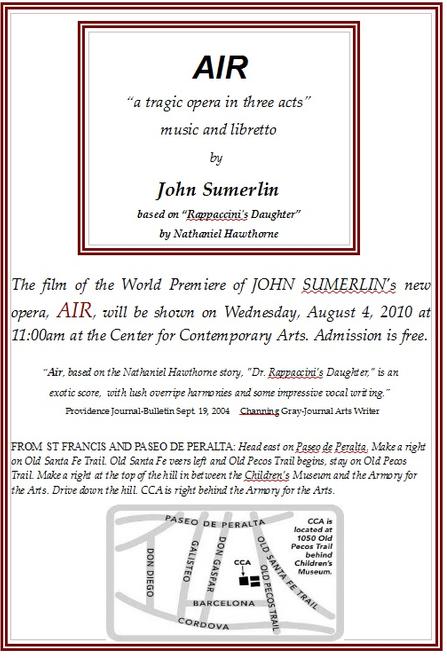 5 HAPPINESS, by Proteus violinist John Sumerlin. A World Premiere performance.
My work is the result of two combined fascinations: first, with the number 5, in many associations with music, and second, with the timbres and techniques of traditional Chinese music. The 5-ness goes back a long way for me. In my full length opera AIR (2002) I used 5-derived rhythms and ornaments frequently, and there were 5 characters, but the numerology was not otherwise structural (that I am aware of). As a youth, playing both piano and violin, I was steeped in the functionality of five fingers versus four fingers. The fascination with Chinese musical sounds grew out of listening to lots of world music in the 90’s. I had a whole cd of pippa-orchestra numbers, and the more-than-banjo timbre and breathless strumming were frequent house music. Sometime in the winter of 2013 I began systematically listening to youtube videos of all kinds of Chinese music: opera, erhu, dizi, pippa, guzheng. The musical content seemed repetitive to me, probably because of my “western” ears, unaccustomed to the microtonal variations in Chinese pentatonic tuning. The sounds, however, were riveting. I began to imagine imitating the sounds on western string instruments, even the vocal techniques from opera, but I did not want to write pentatonic music. My musical language is chromatic, tonal-dissonant, anti-functional. If I could combine those two elements, my language with Chinese sounds and ambience, it might be interesting.
I was reminded that Chinese philosophy partitions all things into the Five Elements (Air, Water, Earth, Metal, and Fire), and this led to the permanence of the pentatonic scales in traditional Chinese music. I was in 5-land. I decided which sounds could be imitated by our quartet instruments, and I started to compose musics about evoking the 5 Elements and their various combinations: Ceremony, Dance, Rain, Wind, Dragon, etc. I used lots of fives of all kinds, and it all led to the heart of the matter, Happiness, to which I gave five iterations. This part of the work, almost at the end, is partitioned by a walk in the still forest serenaded by birdcalls of five notes. As a final serendipity, I discovered that the Chinese written character for “happiness” is the same as that for “music”, sounding different, but implying that the two were once the same word. Music is Happiness.